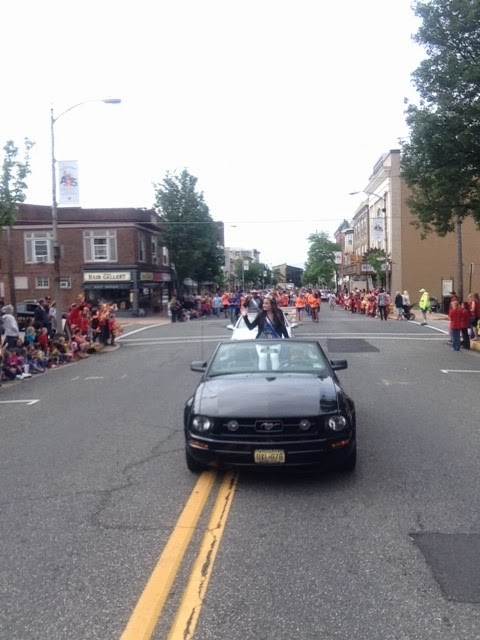 Today marks 37 years of tradition as MPS celebrated Olympic Day! In our town, everything stops for the Olympic Day Parade. Beginning at City Hall, members from the County and City join together with the school district representatives and proudly parade down High Street making their way to the Arena. Students from each of the six elementary schools all participate in the parade. Marching proudly with their school's Olympic Day shirts, the students parade along with police and fire vehicles, and the local pageant winners. Along the parade route, the students in grades kindergarten through 3rd line the streets to wave their makeshift signs and banners. Each yelling out for their favorite Olympian.

Once the students arrive at the Arena, (Our Football Stadium) they all parade once around the track before entering the bleachers in their assigned areas. To start the games, the High School Band (made up of former Olympians) perform the National Anthem. Today, I was moved to hear all six elementary schools singing along with the Anthem. Following the Anthem, our Athletic Director, Mr. Dave LaGamba welcomes all of our distinguished guests. Once all of the dignitaries are introduced, the ceremonial "torch" (a wood carving of the Olympic Torch- with NO flame) is carried in by two lucky Olympians.

Once the Torch is carried, the first set of events begin. Every student, and I do mean every student eligible (must be in good standing to be an Olympian) participates in the various events throughout the morning long competition. The theme of the event has and always will be focused on participation rather than winning or losing. Score is not officially kept by the school personnel - although I am quite certain some of the more competitive students could tell you which school has the most first place ribbons. Everyone receives a participation ribbon and memories to last them a lifetime.

I can remember my own march through town as a Bacon Bear! Running the 400 relay as well as participating in the student favorite - tug of war. It is events like today that make me proud to be the superintendent for the Millville Community.
Posted by Dr. David Gentile, NJ Superintendent at 9:28 AM